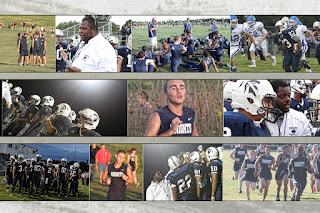 The 2016 fall sports seasons saw some great talent on the field and some outstanding individual performances. Both the football and cross country teams kicked off practice in August. The football team attended a fundamentals camp at Grandview College, while the cross country team started racking up the miles. Both squads were led by veteran coaching staffs. Lorenzo White has coached the football team since 2010, and this was his fourth season as head coach. Jason Anderson has led 4 teams to state as the coach of the cross country team, most recently last year along with his assistant coach, Aric Rush.

The football team changed their approach this season, emphasizing a STATS program. The coaching staff pushed Speed, Technique, Attitude, Temp, and Standard. That eventually transitioned to E+R=O, the Event (football) plus Reaction equals Outcome. At the end of the season, the team became more of a family and fought hard every Friday night. This team had a whole lot of talent and with the system in place, White saw that one of the biggest improvements was "the relationships they made with each other and the coaches." That attitude was felt across campus and generated a huge amount of school pride among the entire student body. At the end of the season, two Knights earned All-District honors because of their work on the field. Shabaka Thurman earned first team recognition, while Mike Solo earned second team honors.

This year's cross country squad was one of the youngest in recent memory, but they grew over the course of the season. Coach Rush saw "a lot of competition [during practice] to be the fastest on the team. Each runner truly found out where their strengths were to ultimately run their fastest race." In many ways, the team got smart in how they ran each race, and this effort paid off on the course. The highlight of the team's season was when they won the Carroll Kuemper Invitational in September.

The true standout of this year's team was Jakob Estermann. The senior runner was the fastest Knight all season and pushed the rest of the team to keep up with him. "I can't say enough about Jakob's work ethic. He came to practice wanting to win and often would not let anyone finish in front of him without a fight," said Coach Rush. That season long work ethic paid off at the District meet when he finished 10th and qualified for the Iowa High School State Cross Country Meet, annually held in Fort Dodge. At the meet, he ran 17:50 and finished in the top half of all runners. Jakob became only the 30th runner in school history to run at the state meet.
Posted by Woodward Academy Knights at 12:51 PM No comments:


Experiencing trauma can fundamentally change a person’s life. Tragedy is unpredictable and can creep up in the form of natural disasters, a family member passing away, or living in an environment that fosters prolonged emotional stress. Unfortunately, for many students at Woodward Academy, traumatic experiences have plagued their life at far too early of an age. Many live with post-traumatic stress (PTSD) symptoms from living in neighborhoods with rampant community violence (i.e. gang neighborhoods), and are asked to function as if nothing has ever happened.

It takes a long time to heal from severe emotional pain. If not addressed, youth who experience trauma early in life are at a much higher risk of having problems in adulthood, such as anxiety disorders, drug abuse, and prolonged criminal behaviors. Over the past several years, the clinical team at Woodward Academy has placed a greater emphasis on trauma therapy, including the use of Eye Movement Desensitization and Reprocessing (EMDR) therapy.

Read more »
Posted by Woodward Academy Knights at 10:17 AM No comments: