Powerlifting in the News // World Championships

When Julious and his coaches returned from Prague, Czech Republic after the IPF Sub-Juniors World Championships earlier this month, the local news media wanted to get their story. They went on a mini press tour with KCCI Channel 8 and The Des Moines Register both coming to campus for the story. The KCCI video is embedded above and the Register article can be read here.

We want to thank both Mark Tauscheck (KCCI) and John Naughton (Register) for picking up the story and sharing it with central Iowa. Earlier this year, Mark came to campus to cover the Knights basketball team when they qualified for state. John is also familiar with Woodward Academy and ran a front page article in 2010 when we started our football program.
Posted by Woodward Academy Knights at 9:08 AM No comments: 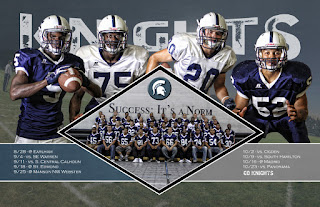 The fall sports posters for the 2015 season are out and can be picked up on campus. With a couple games and meets into the season, the Knights are getting into their stride this season. The football team got their first win in week 2 against a tough SE Warren team. The cross country team has been improving their times all year and can boast that two runners are consistently in the 18's with several more close. Both teams are looking to have a great end to the season. If you have a chance to get to a game or meet, cheer on the Knights. In the meantime, get updates on our Facebook page. 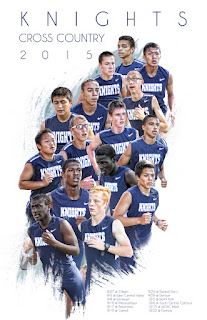 Posted by Woodward Academy Knights at 9:24 AM No comments: 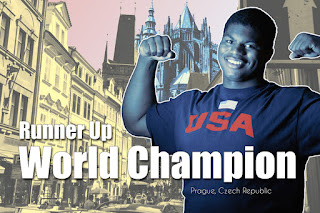 When Julious committed to the U.S. team in May, practice revved up into high gear again. He had already taken a month off of lifting after the USAPL High School National Championships (where he break 3 American records and became a National Champion) under the assumption that his season was over. So with 4 months to prepare for the biggest stage, Julious went to work.

Coach Glen Miller saw a renewed work ethic in Julious when practice for World’s began. “He wanted to do more during practice because he knew the competition would be harder.” Julious started to realize that he was on the verge of being a truly great powerlifter; one of the best in the entire nation. But raw talent doesn’t get a lifter very far when competing at this level. The only way was to do lift the weight every week. He did just that and got his max squat up to 700 pounds.

The coaches changed some workouts for Julious during this time and added another day so that he was lifting 5 days instead of 4 during the high school season. Normally, the weight room is packed during practice with the entire team creating sounds of metal weights and bars banging against steel racks. But now the room was quieter with just Julious and the coaches. It was easier for them to focus on technique during this time, but it was also a good bonding experience.
Read more »
Posted by Woodward Academy Knights at 8:11 AM No comments: