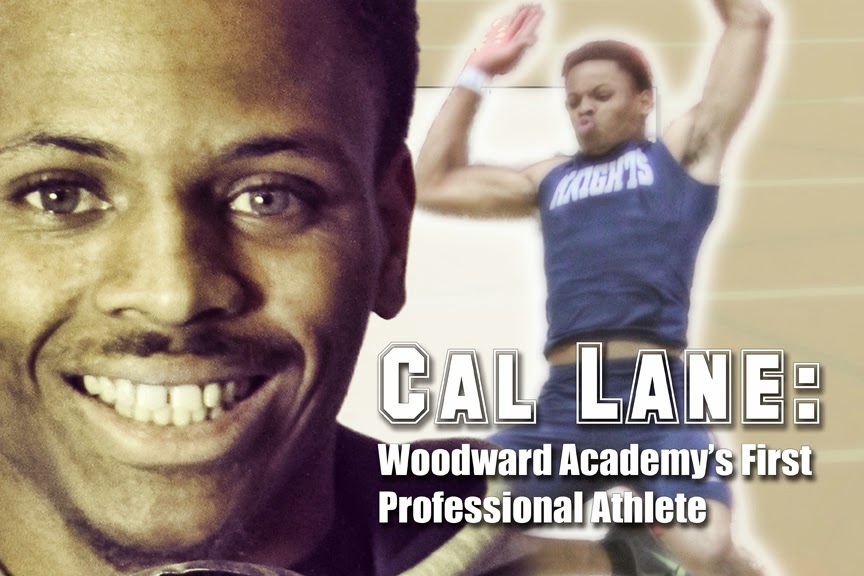 Over the past couple years, we have been able to follow the professional track & field career of former Knight Cal Lane. He was the cover story of Volume 28 of the Knightly Knews that you can download here. Cal graduated from Woodward Academy in October 2007 and returned to his high school where he won 6 individual state titles and was inducted into his high school's athletic hall of fame. Until recently, he trained primarily on his own and competed in long jump events across the country with a little backing from Woodward Academy and the Lifetime Commitment Fund.

In 2013, he competed at Iowa State University and won the long jump contest at their indoor winter event. He also won at an event held at Arkansas University (you can see the video here) and has competed in several other meets, including those held at The University of Kansas and the 2014 USATF Indoor National Championships in New Mexico.

On December 19, Cal jumped at the University of Indiana and hit a huge jump: 26 feet, 4 inches. He won the meet and is currently ranked #1 in the world. It qualified him for the USA Indoor National Meet in Boston that is being held February 28-March 1. It also ensures that he can jump in any meet that he desires for the next year. We also just found out that Cal is now signing with an agent and will field contract offers that will help pay for clothing, travel expenses, and cash. One of those contracts was from Nike. Cal has decided that over the next few months, he will compete in Europe at events that will pay him between $500-$5,000 in prize money per meet. We are very proud to say that Cal is a Knight and is our first professional athlete.
Posted by Woodward Academy Knights at 9:48 AM No comments: 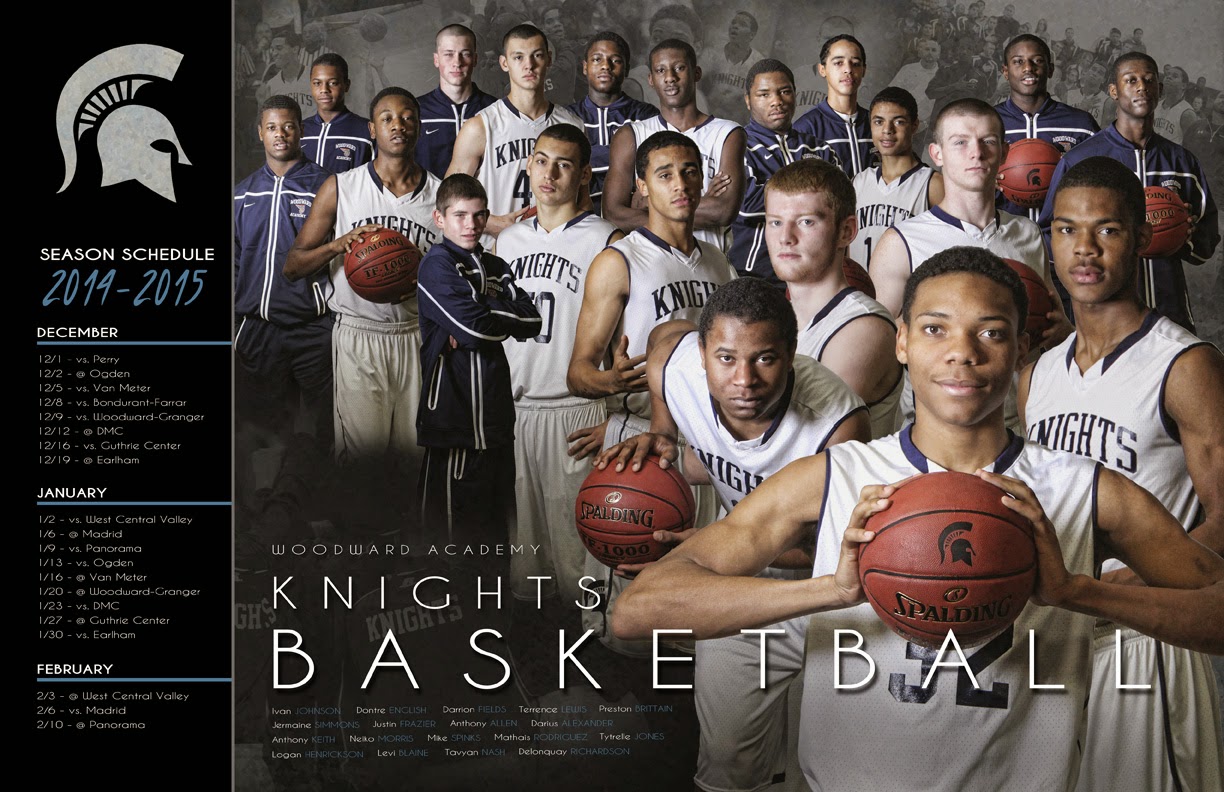 Here is the official poster for the 2014-2015 Knights basketball team. Led by senior Ivan Johnson and junior Anthony Allen, the Knights are off to a great start this season and are a lot of fun to watch. Their balanced team and upbeat style has given opponents a lot of challenges and they plan to continue that trend into the second half of the season. If you didn't have a chance to see the video of the Knights beating a ranked and highly regarded 3A opponent during non-conference play, you can check that out by clicking here.

The image is a composite of individual pictures put together to form the team. If you're on campus, pick up a copy of the poster and attend a game if you get a chance. We'll have more on the team as the season progresses.

Posted by Woodward Academy Knights at 9:00 AM No comments: 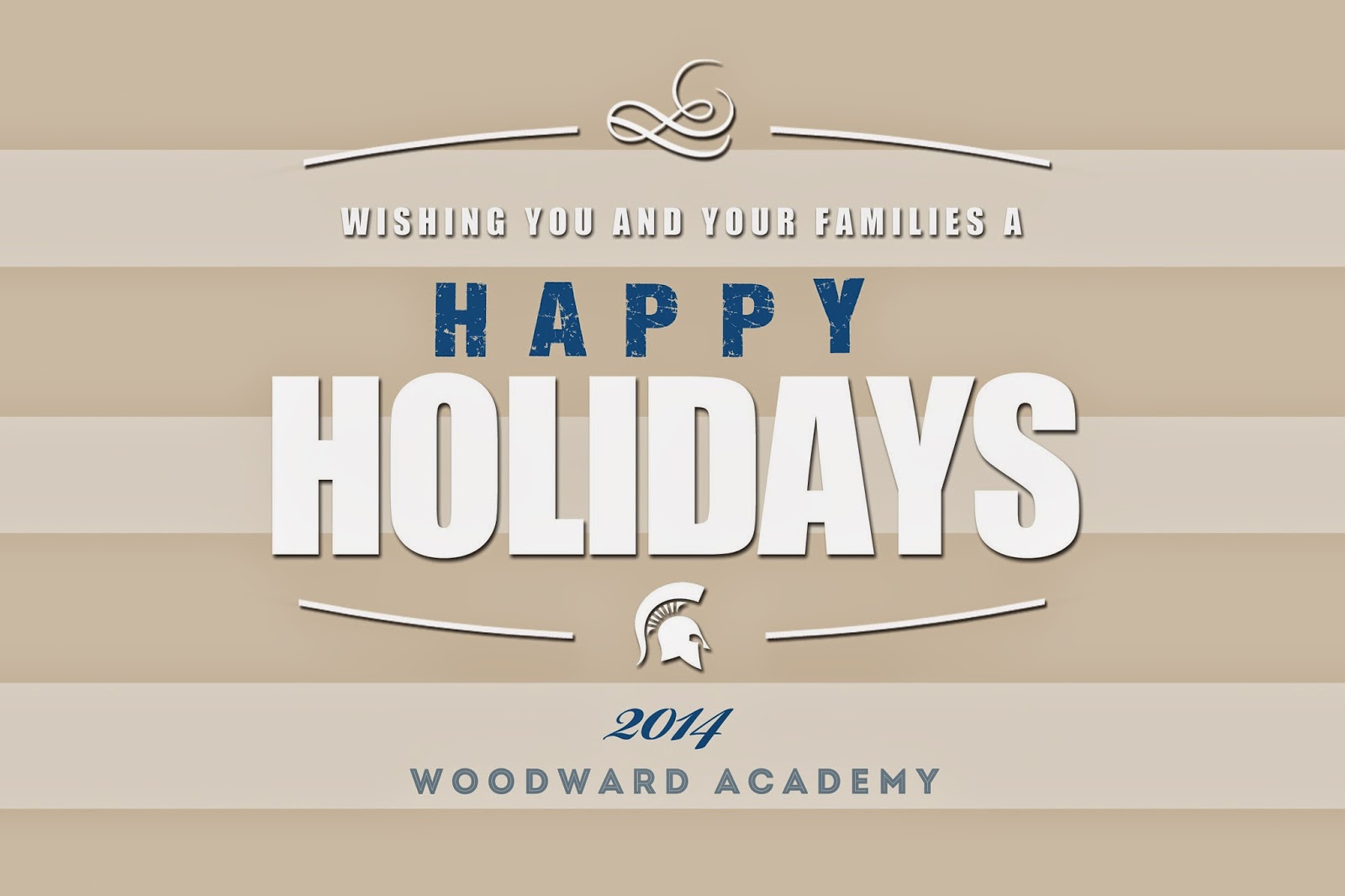 Posted by Woodward Academy Knights at 9:50 AM No comments: 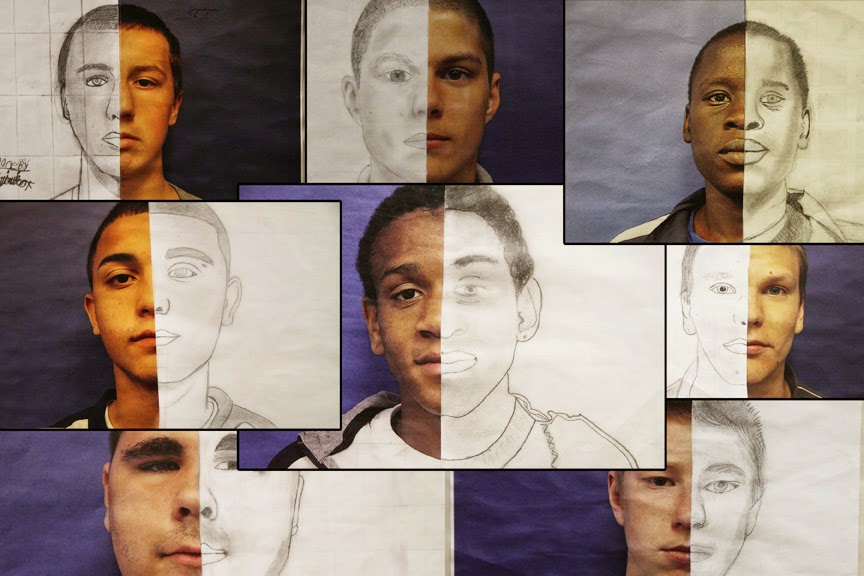 "Draw what you see, not what you know," was the common phrase used by Sarah Elmore, art teacher at Woodward Academy when students started working on self-portrait projects. After taking their picture, students determined their own version of the project. Pictured are some great examples of what one class did. Other classes did full pencil renders of their image.

All students were asked to make grids on their pictures with several vertical and horizontal lines. This is a common technique used by professionals because it allows artists to break the project up into smaller sections, allowing them to draw faster and more efficiently. In art class, students are always improving their skills. A secondary focus for students who excelled in the grid technique was to focus on shading and to add value to their drawings.
Posted by Woodward Academy Knights at 8:30 AM No comments:


December basketball does reflect with certainty where a team will end up at the end of the season, but key match ups can be used to assess where a team is right now compared against good competition. That happened on Monday night when the Knights (ranked 21st in 2A) hosted Bondurant-Farrar (ranked 9th in 3A in the latest power rankings) in what turned out to be a great contest.

In a back and forth game, the Knights found themselves down 8 at one point in the 4th quarter but rallied a comeback to eventually win the game. The upset was great, but not surprising considering how the Knights have performed this season. The video shows the intense final minute of the game and the pride that WA students show at every home game. You can check out some images from the game as well on our Knight Pics website. The Knights are off to a great and entertaining season so far and we'll have more updates as we move into the new year.
Posted by Woodward Academy Knights at 5:20 PM No comments: 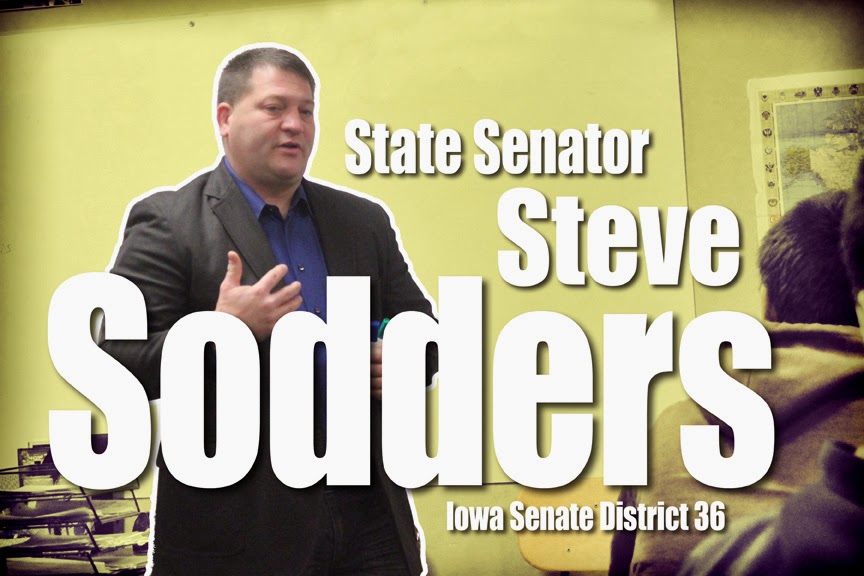 Iowa State Senator Steve Sodders visited Woodward Academy campus today and talked with students about his experiences in the Iowa State Senate. During the two government classes, the Senator discussed a range of topics that included political strategies, fundraising, campaigning, volunteering, and how he got elected. His experience really supplemented what the government classes were talking about in class and he provided some great real world experience insight into state level politics.

One of the coolest things about his visit was that he really came with the intention of interacting with students. During the Q & A section, students suggested bills to the Senator, many of which he identified as having a legitimate chance of being proposed at the state level. Over the next couple months, he will determine which ideas have the best chance of making it on the Senate floor and will follow up with William Terry (Lead Teacher and government instructor who organized the visit) on any updates.
Posted by Woodward Academy Knights at 2:19 PM No comments: 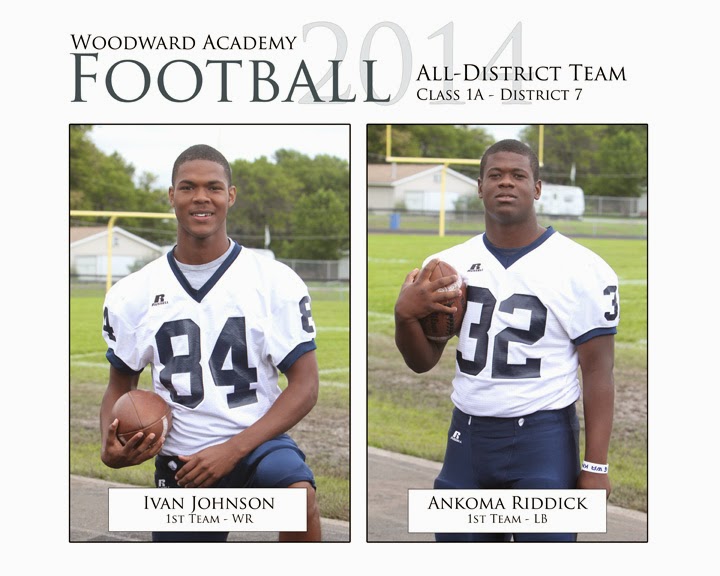 Ivan Johnson and Ankoma Riddick were both named First Team All-District this year for their standout performances on the football field. Ankoma led the team in rushing on the offensive side of the ball, but demonstrated that his strengths were on the defensive end. He led the team in solo (61) and total tackles (68.5) and served as a captain on the team throughout the season.

At 6'4", Ivan was the perfect receiver for a passing offense that broke nearly every school record this season. Quarterback Mike Payne (not pictured) received an honorable mention and set new school records in pass attempts (225), completions (96), yards (1640), and touchdowns (11). Most of those passes were to his star receiver, Ivan Johnson. This year, Ivan set a new standard for the position and now holds every school record that includes receptions (29), yards (649), yards per catch (22.4), and touchdowns (7). Darrion Fields also received an honorable mention on the defensive end and set a new school record with 6 interceptions this season for the Knights.
Posted by Woodward Academy Knights at 12:15 PM No comments: 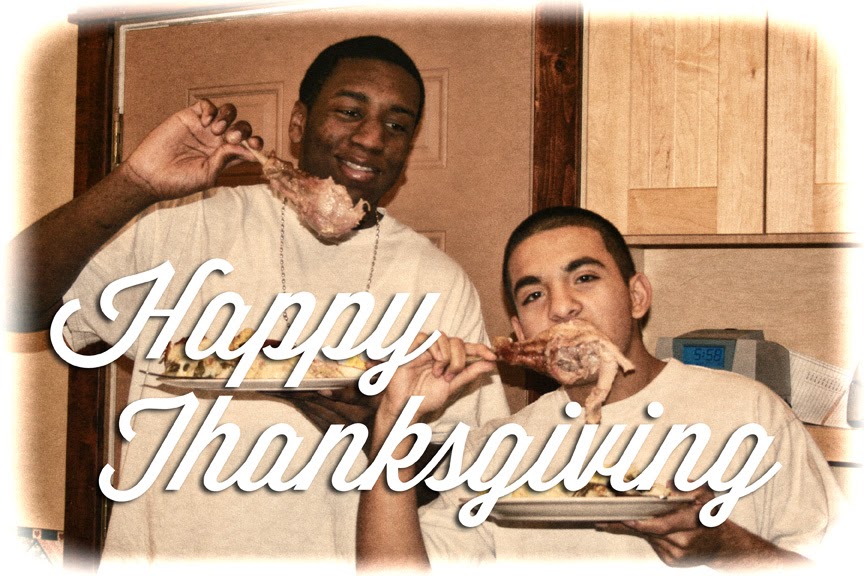 Thanksgiving break marks the beginning of a holiday season where students think about their families and home life more than usual. These weekends are also used to make that desire to see loved ones a reality. This past weekend, many students received home passes and ate Thanksgiving dinner with their families. In fact, some dorms sent 1/3 of their students home for at least part of the weekend. Home passes are earned by the students based on how well they are performing on the dorm. Even then, some students stayed on campus because they preferred a home pass over Christmas break.

For the students who stayed on campus, all was not lost and a lot of activities were planned to help keep them busy. Holiday weekend are often less structured than typical ones. There was a lot of football being watched and board games being played. On Thanksgiving day, a lot of staff helped cook meals and some of them were full on feasts. Nothing can replace spending a weekend at home, but it is amazing what a good, home cooked meal can do.

Posted by Woodward Academy Knights at 1:05 PM No comments: